Blastocystis hominis is reported to be the most frequently found protozoan in stool samples. It has a worldwide distribution and its presence in symptomatic and asymptomatic people has created a great deal of discussion regarding whether or not to treat it. It is anaerobic and inhabits the cecum and large intestine of humans and animals.

This organism was first described in 1913 and was labeled a yeast. It was not until 1967 onward that any attention was paid to its classification. It is now considered a protozoan in its own category. Long believed to be nonpathogenic, it has only been in the last few years that enough studies have been compiled pointing to its positive pathogenic aspects. Here is what we do know.

The cyst form is known to be responsible for transmission. The fecal-oral route has been demonstrated in human to human, human to animal, and animal to animal transmission. Fecal materials in drinking water or in food probably represent the most plausible route for infection.

In the animal kingdom this organism has been isolated commonly from mammals, birds, reptiles, amphibians and insects. Domesticated animals like pigs, cattle, chickens, and ducks along with dogs and cats can harbor this organism. Snakes, iguanas, tortoises and wild frogs have also been found with Blastocystis hominis. It can also be carried by the common cockroach.

This parasite is able to create pathogenic changes including disruption of the intestinal cell barrier, the production of pro-inflammatory cytokines such as IL-8, suppressing nitric oxide production and in some cases cell death. This organism has also been found to cleave immunoglobulin A, which is a first line of defense against organisms adhering to the gastrointestinal mucous surfaces. Blastocystis hominis infection may therefore encourage other types of pathogens to have greater access to gastrointestinal tissues. There have also been reports of chronic urticaria caused by this organism.

The most common symptom of Blastocystis infection is diarrhea and abdominal pain both of variable severity. Other common symptoms are weight loss, constipation, flatulence, nausea, vomiting, bloating, and loss of appetite. Blastocystis has also been found in people with no symptoms at all. There have been rare reports of Blastocystis causing liver abscess and in the case of adenocarcinoma it was found within abdominal fluid in the peritoneal cavity.

There is a strong association and probable causation with Blastocystis hominis and irritable bowel syndrome. Numerous studies have pointed to this connection. My own studies hold this connection up quite well. Many of the same cellular changes seen in IBS patients are also found with chronic infections with Blastocystis hominis. There is also a higher incidence in immunocompromised individuals.

In the pediatric population there is a higher incidence of Blastocystis infections in both immunocompetent and immunocompromised children. Children undergoing long-term corticosteroid therapy are also at increased risk.

Regarding treatment, many clinicians are skeptical regarding the pathogenicity of this organism and consequently are more likely to ignore treatment. In a case in which all of the other possible causes of abdominal discomfort have been ruled out, a Blastocystis hominis infection may be considered for treatment in traditional medical circles. The usual drug prescribed is metronidazole with alternatives being trimethoprim- sulfamethoxazole and Paromomycin. In spite of this, there have been reported treatment failures.

Regarding the use of probiotics, more studies are needed. In one study of pediatric patients, Saccharomyces boulardii was given for 10 days. One month after treatment 94.4% of the patients became asymptomatic with resolution of stool cysts.

Nitric oxide can be generated by epithelial cells and is one aspect of the host’s response to invading microorganisms. Nitric oxide also has profound effects on the tone of the vascular system. Blastocystis hominis organisms have been found to consume arginine the key protein in the manufacture of nitric oxide thus lowering the level of nitric oxide. It would make sense to supplement arginine during the course of treatment.

In the course of my observations at the ParaWellness Research Program I have found that silver preparations such as colloidal silver, mild silver protein in various strengths have a positive effect on the elimination of this organism. When dealing with protozoans I find that synergy is important. Some organisms will tend to escape treatment. Using more than one type of remedy is more likely to have a better effect especially if it can be carried on long enough to get all the stragglers. To this end I like to use formulations of essential oils whose properties chemically can contribute to the elimination of protozoan parasites especially Blastocystis hominis. Using them in a low dose over a longer period of time such as three months has had a reasonably good success in the elimination of this organism as well as other protozoans.

In summary, Blastocystis hominis is a pathogen that is associated with disruptive changes within the gut that can cause a range of symptoms and have adverse effects on the immune system. Its presence in a stool sample should not be ignored. It seems to be very prevalent in patients with IBS and possibly those with inflammatory bowel disease. Traditional treatment has often led to failure. Various alternative treatments have had good success possibly because they can be carried on long enough to get all the stragglers. 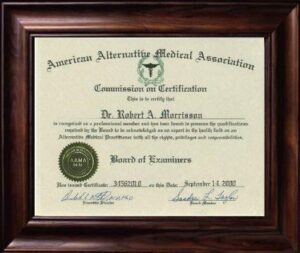 Apply for Board
Certification Today!